Skip to content
FREE SHIPPING ON ORDERS OVER $100!
ORDER YOUR HOLIDAY HAM BY DECEMBER 16 AT NOON EASTERN TO ENSURE DELIVERY BY CHRISTMAS!

Pederson’s Natural Farms does what it takes to stand out in a crowded bacon market.

While many things have changed in recent years in the meat industry, there has remained at least one constant. Namely, consumers just can’t get enough bacon. As a sandwich filler, as a pizza topping, as a breakfast side or just by itself, bacon is in high demand in restaurants or retail channels. As the bacon sector has boomed, discerning consumers have been willing to spend a little more to buy just the right product – the brand with the best flavor, the best packaging, the best attributes, etc. That demand for something different — a little higher-end product — has turned consumers on to Pederson’s Natural Farms more and more often. The small Texas company caused a big stir several years ago when it introduced a sugar-free bacon to the market. Pederson’s continues to use every tool at its disposal to maintain that strong relationship with its consumers.

Last year, as consumers were forced to cook at home more often, they indulged in high-quality bacon, and Pederson’s enjoyed record sales of $70 million as a result. It’s no overnight success story, though. Twenty years ago, the company had a handful of employees and no real identity. Its steady growth of the last few years has been the result of advancements in branding and product development — not to mention considerable sweat equity.

“Being in a niche business, we had to deal with the losing side some years, and survive enough times that you start figuring out ways to mitigate it pretty quickly,” says Neil Dudley, VP of Sales for the Hamilton, Texas, company.

Cody Lane, president, acknowledges that companies such as Pederson’s can’t go to market with me-too products that just mirror what the big companies are producing. Creating those points of differentiation has been important for the company. Those differences have not only come from products like the no-sugar bacon, but also from the story behind the bacon. Pederson’s has put a focus on sustainability, but at a level that has wide appeal. 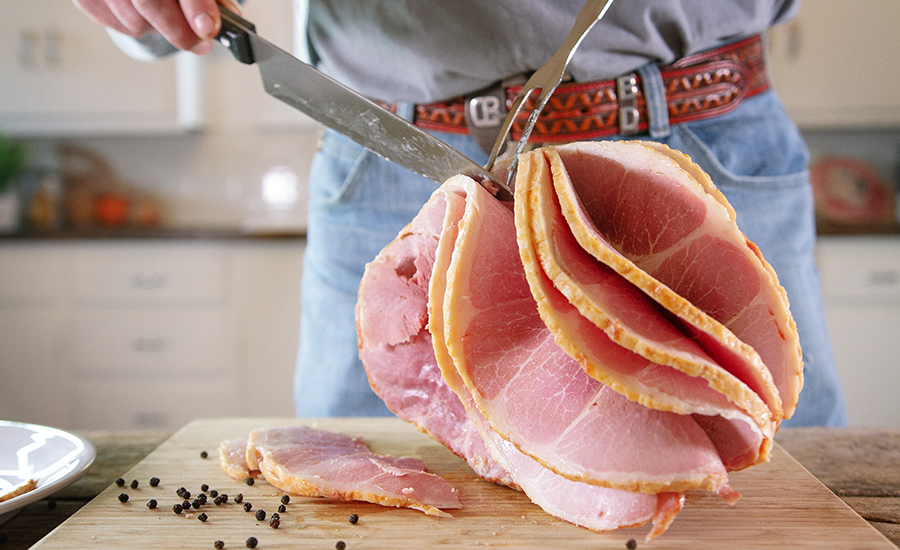 “People throw sustainability around, but that leave out the fact that it has to make money in order to be sustainable. A lot of people have good intentions when they get into things, and they go too far past what the consumer is ready for,” Lane explains. “We spent a lot of time and energy and money on research, trying to find out what the consumer really wants – whether they’re just following some buzzwords or whether they really are interested. I would say most of our consumers really care, and we’ve developed a trust over the years, so they know that we care.”

“It helps us determine what we should put prominently on the label, or what needs to be called out on the front or what can be put on the back,” says Lane. 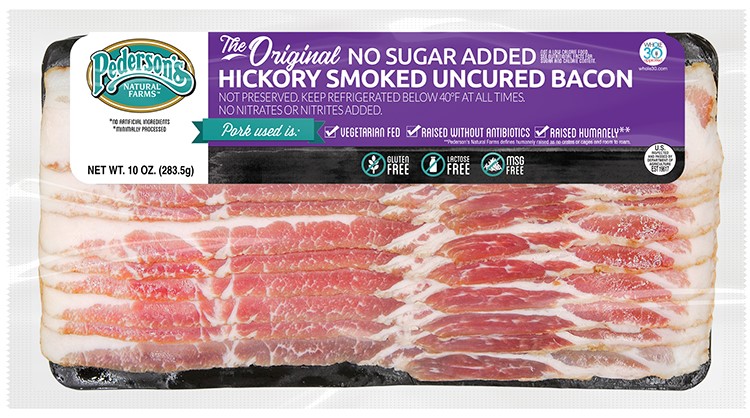 Building up Business
Lane has been with the company for 20 years and Dudley 19; in their earliest years, they didn’t have those resources, including the time to think that far ahead.

“This is my first real job,” Lane says. He graduated from Texas A&M and did day jobs, working cattle for whichever rancher needed help that day. Then his wife, Chrissy, got pregnant, and he needed a more permanent job.

“She actually sent my résumé here and called and scheduled the interview and everything. I just showed up and got hired,” he says.

Lane has an economics degree from A&M and was originally hired as a marketing manager. On the day he showed up, management told him that he would actually be the new quality assurance manager. He didn’t know anything about being a QA manager.

There were about 12 employees at the time, so Lane was exposed to every facet of the company’s business, which at the time included fresh pork as well as processed items like bacon. After a year at Pederson’s, he was promoted to the role of president. Lane then called on Dudley, who had been his friend since before kindergarten.

“When he got promoted to president, he knew I was back home, working on my family ranch and rodeoing. Basically, I was a single guy and didn’t know what I was doing next,” Dudley says. “I started in QA, which I think was really smart on Cody’s part. That’s a very basic building block that any food company needs – food safety, product quality. Those pieces of the production puzzle that if you don’t have, you really don’t have a process. Then I basically followed his same path.”

“I tell everybody the reason I’m the boss and he’s not is that he went to Texas Tech instead of A&M,” Lane cracks. 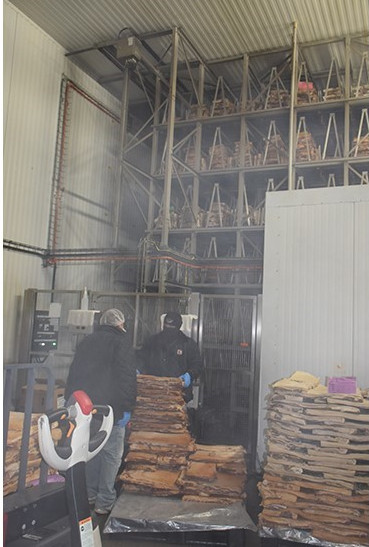 “Independent processors across the country live this same life,” Dudley relates. “Cody’s wife is working with us, bouncing babies on her knee while she’s invoicing orders, and we’re driving the truck and delivering product and hopefully selling product at a new store on our way home. It was kind of like the Wild West, building it up. My mom was our accountant part-time, and we thought we were brilliant for getting her hooked up to the system remotely.”

A convergence of events helped to move Pederson’s to the next level. The company, which had dropped fresh pork in favor of focusing on further-processed items, surpassed $50 million in sales. It also rolled out its no-sugar bacon, which became a huge hit among consumers. Then Dudley got married, and Stacy Dudley had considerable experience in marketing, from pitching songs in Nashville to running horse shows.

“She redid all the branding and marketing and still does a great job of it,” Lane says. “She does a really good job of, well, kindly telling us ‘You guys are missing it here. Y’all are doing what you think is best and what you like, and you’re not trying to listen to the consumer.’”

As Pederson’s has improved its marketing infrastructure, it has also expanded its processing capabilities. The facility in Hamilton has expanded several times to total 40,000 square feet in size. It has added automation where it can, including a robotic cooler that handles the finished bacon packages. However, much of the process still involves manual labor and traditional practices. Pederson’s employs around 100 people and produces its bacon in small batches, using tumblers instead of injectors.

The company has, within the last four years, gotten back into fresh pork. After years of getting its pork from packers, it works directly with select farms and has their hogs custom-processed. The bellies go to the Hamilton facility, and the other parts of the carcass are sent to co-packing plants to produce sausage, ham and fresh cuts.

“Getting enough of a supply of bellies became an issue. We came to the decision that if we want to grow, we have to get back involved in the live side,” Lane says. “Now we have several farms across the country we contract with, and they raise it to G.A.P. standards.”

Using G.A.P. (Global Animal Partnership)-certified producers helps enhance the trust that the public places in Pederson’s products. Interested consumers can investigate the standards and see how those animals are raised. Lane stresses the importance of using a third-party auditor to sign off on a farm’s production methods.

Pederson’s Hamilton facility produces all of the company’s bacon products. In addition to its no-sugar bacon, beef and turkey bacon, uncured bacon and crumbles for retail, employees also produce bulk packaged bacon for the foodservice sector. One of the company’s initiatives is to partner with other processors for product collaborations. Recently, California turkey company Diestel Family Ranch released a line of turkey burgers that included Pederson’s bacon. The two companies have been friendly for years, having interacted at numerous industry events. It was a collaboration between two like-minded companies.

“At a time when so much of food production has been consolidated and commoditized, it’s become increasingly important for independent farmers and manufacturers to work together to have a voice in the industry,” said Heidi Diestel, fourth-generation turkey farmer at Diestel. “Partnering with our friends at Pederson’s Natural Farms to create our Ultimate Turkey Burger with Uncured Bacon helped further our mission of farm-to-table transparency by bringing these two independent, family-owned businesses to the front of the package, letting shoppers instantly know where the pork and turkey came from. At Diestel, we feel so fortunate to have a relationship with folks like Neil Dudley and the Pederson’s team who share our values of quality over quantity and doing things the right way, without compromise.”

The Biggest Bacon Bash
One of Pederson’s biggest annual events has been Bacon Bash Texas. Held in the fall in Cranfills Gap, the event is billed as the country’s largest bacon cookoff. Dozens of teams enter to make the best bacon dish, and thousands of bacon lovers converge to sample the dishes, listen to live music or enjoy a cold drink — made with bacon, naturally. Bacon Bash Texas is also Pederson’s largest fund-raising effort and has raised over $500,000 since 2012. The event supports Children with Type 1 Diabetes and Niki Warms the Cold, a local charity that provides blankets and coats to those in need.

The 2020 event was canceled due to COVID-19, but early indications are that the 2021 Bacon Bash Texas will be the biggest one yet. Meanwhile, the company has added additional charitable endeavors, such as a 2021 partnership with Feeding America, the nation’s largest domestic hunger-relief organization. Pederson’s pledged to provide more than 1.5 million meals during its first year partnering with Feeding America.

“It feels good to me that we can leverage a really small spend on our part to a really big end result, and that’s a tribute to Feeding America,” Dudley says. “We want to find those kinds of things.”

The outreach efforts, like its high-end bacon and its focus on humane handling, are all examples of a company willing to go that extra step. Pederson’s Natural Farms has found a successful niche, and it’s easy to see that the company is doing something that’s in high demand, Lane says.

“All our competition has been bought by bigger companies,” he points out. “A lot of them are just marketing companies now that don’t actually do any production themselves or don’t own the facilities. They hire people like us to produce products for them.”

“That’s not a shot at them, it’s just not how we want to do it,” Dudley adds. “We like to have control over these pieces of the business, and we’re not totally dependent on somebody else to make it work.”