Best Bacon Ever by Daniel Vaughn

In a former life, the Dallas-based Vaughn was an architect and a mere barbecue hobbyist, eating, reviewing, and writing about smoked meats for his popular blog, Full Custom Gospel BBQ. Then, in March 2013, hobby turned to profession, as he became the country’s one and only barbecue editor.

His first book, The Prophets of Smoked Meat: A Journey Through Texas Barbecue, was released in May 2013 by Ecco, Anthony Bourdain’s line of books.

We received this awesome blog created by Daniel Vaughn from www.fullcustomgospelbbq.com.    The self-proclaimed Mr. & Mrs. BBQ Snob, organized an all out Big D bacon tasting for their anniversary.

What do Mr. & Mrs. BBQ Snob do for their anniversary? We organize an all out Big D bacon tasting. The rules were simple. It has to be available in DFW, and we had to test your standard grocery store varieties against the artisinal bacons around town. Of course the taste was of utmost importance, but value also had to be considered. Value becomes very important to someone with over $50 of bacon in the fridge.

Each bacon is compared below based on the cost per bacon strip as well as the cooked weight percentage of the raw weight. This not only shows the value based on cost, but also based on the amount of fat you have to pour into the old grease bucket.

The most beautiful piece of food documentation I’ve ever done. 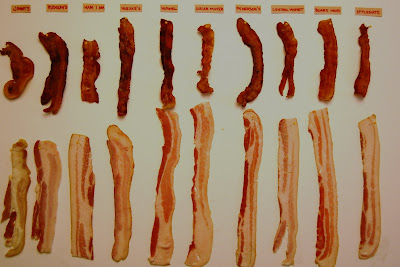 I know you’re salivating, so enough with the formalities. How did they taste? Here they are from left to right on the board.

Jimmy’s – This bacon is from Columbia Packers in Dallas, which is also the bacon carried by Kuby’s. It was by far the worst sample of the tasting, but I can’t blame that on Columbia Packers since the meat was simply spoiled. Jimmy’s kept these strips in their case far too long, and the result was rancid tasting bacon that I instinctually spit out before it could contaminate my palette further.

Rudolph’s – This bacon is cured and smoked in house, and only huge slabs of bacon were displayed in the case. This allows the customer to determine the thickness they prefer when ordering, and I asked them to slice some thicker strips. I may have gone a bit too thick since these strips had a hard time crisping up. It had a strong meaty flavor which was not overpowered by excessive salt. There was a light smoky flavor and the strip was chewy, mainly due to my request for thicker strips. Altogether a fine bacon.

Ham I Am – Imported from Arkansas, this Ozark Trails brand bacon has been called the best bacon in America by some. It’s hard to argue given it’s strong showing in this tasting. While they had one of the lowest weight retention percentages, the meat that was left was a beautiful specimen of meat. These thin slices melted on the tongue spreading the smoky and salty goodness. This bacon can be ordered by mail or purchased at the companies small unofficial storefront in Plano. Call ahead.

Nueske’s – Based on a Cook’s Illustrated tasting, this one was not recommended because it simply tasted too smoky. I knew I’d like it. There is definitely a punch of smoke in these thick slices. They held their shape well and had a good chew with moderate saltiness. While the flavor was pleasing, it did not taste like traditional bacon, but more like a smoked pork chop. It’s available at Central Market.

Hormel Black Label – This is my standard grocery store bacon, so I was anxious to see how it stacked up to the expensive stuff. It ended up being a decent value with high fat content, and decent bacon flavor. It began a long line of generic tasting bacons whose flavors varied only based on saltiness and texture. This one had a nice chew, and will remain my standard choice for inexpensive bacon.

Oscar Mayer – This bacon was so thin that it couldn’t help but melt in the mouth. Extreme saltiness was overpowering in these brittle strips and it lacked any sort of smokiness.

Pederson’s – The first of the uncured bacons received high marks. It had a good texture with just enough chew. A nice level of smoke and moderate saltiness didn’t make me miss the nitrites at all. Nitrites and nitrates are added to most bacon varieties during curing to act as a preservative. They also lend a familiar bacony flavor and help the strips retain their reddish hue. There are a few smokehouses out there that tout there nitrate-free bacon because of the negative health effects of adding these preservatives.

Central Market Brand – Given its relative cost to other grocery store brands, I was expecting a lot out of this one, but it ended up being a generic tasting bacon. The brittle strips had little smoke and moderate to high saltiness. Simply a one note strip of pork.

Boar’s Head – I enjoy their deli meats, so I assumed the bacon would be good too. Well, other than the pleasing texture, it was nearly identical to the Central Market bacon.

Applegate Farms – Another uncured variety available at Central Market and Newflower Market. I tried the “Sunday Bacon” which was thin with a nice meltiness. It was full of flavors, but they competed for attention. Between the high salty notes, bold smokiness and sweet flavor, my tongue wasn’t sure which one to enjoy. Even given that, it was a quality bacon. 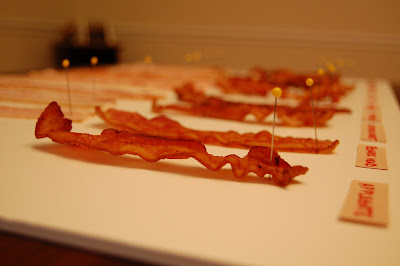 Before I knew it, I had eaten all ten slices of bacon, but there was more to cook, lots more. 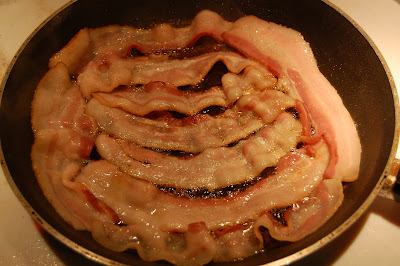 The grease jar was empty when I started. 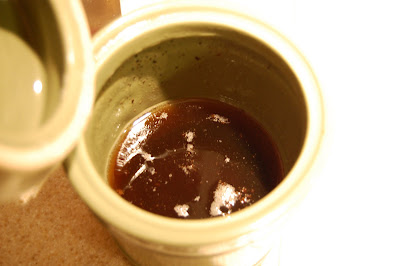 In addition to retail bacon, Smoke in Dallas cures and smokes their own bacon, but I don’t know of any other area restaurants who do the same. I hope this list will help guide you on your next shopping expedition for some quality bacon. I’m also eager to hear if any of you have a favorite out there that didn’t make the list. Happy frying.